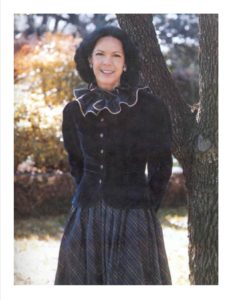 Joci Straus’ attitude that living well is “growing up, not old” permeates each new project she tackles.  The Junior League is pleased to honor her as Volunteer Extraordinaire 1982 for her accomplishments and inspiration in growing up.  With husband, Joe Straus, Jr., she has raised three children and developed volunteer interests which stretch across local and state fine arts, health, and Republican organizations into national political arenas.

Joci’s inquisitiveness about her community and its future led her to delve into the stimulating, ever-changing world of politics.  A staunch supporter of the two party system, Joci applies corporate theory to her political views.  “Competition in free enterprise makes it successful. Government is the biggest business in the country, and a two party system stimulates healthy competition.” Responding to the frequently asked question about politics being dirty business, Joci candidly replies that “when you get up and say “good morning” to your family, you’re in politics.”  With such conviction and expertise she has served as chairman of the Nixon Girls, a young support group, as a Precinct Chairman, Finance Co-Chairman for Senator Tower, the Committee to re-elect Jim Nowlin, President Ford’s Finance Committee, Co-Chairman for Senator Tower’s re-election in 1978, State Co-Chairman for George Bush for President, and the Co-Chairman of the Reagan-Bush ticket.  Quite an accomplishment for a lovely lady who used to sell poll tax at cocktail parties!

Joci is continually learning more about San Antonio and its businesses.  She is interested in doing her part to provide a fine arts environment which will stimulate and interest its citizens.  Her avenues of voluntarism feed into each other, thriving on the interaction of divergent activities, linking people, ideas and promising future rewards.  Our vivacious and articulate honoree currently serves as Chairman of the Board of the San Antonio Performing Arts Association, as a member of the Texas Commission for the Arts, and its supporting arm the Texas Arts Alliance.  Joci has also brought her special blend of talents to such organizations as the Development Boards of the University of Texas Health Science Center, the Bexar County Hospital District, and the San Antonio Zoo.

Our Volunteer Extraordinaire believes that good volunteers can support the community, give input and be called on to train others for volunteer jobs which will be needed in the new economy.  She sees today’s Junior League member, “serving with self-confidence, one who has done her homework, and is proud of working in her special interest area with commitment.”  Mrs. Straus is her description of today’s Junior League member, “vital, viable, alive, and articulate.”