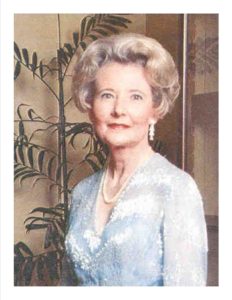 Each year the Junior League honors a sustaining member as its Volunteer Extraordinaire.  A Volunteer Extraordinaire exemplifies the purpose of the Junior League that of voluntarism.  She is a member who has translated her volunteer training and education into community commitment and involvement.  Libby Bishop easily qualifies as our Volunteer Extraordinaire for 1984.  Having gracefully served in many capacities while active in the Junior League, she now continues to use her training and expertise not only for the benefit of our community, but on a state and national level as well.  Some of the positions she held as an Active were The Bright Shawl Garden Chair, Assistant Community Arts Chair, Tea Room Treasurer, Regional Conference Chair, Treasurer, Recording Secretary, Vice-President, President, By-Laws Chair, Chair of the Admissions Committee and she served on the Diamond Celebration Steering Committee as a Sustainer.  One of her friends wrote, “As an Active, Libby gave much more than required, and as Sustainer, she still shows her love for the League by participating when called upon.”

An important aspect of Libby’s involvement in the community is the diversity of her interests. Many of our city’s charitable, cultural, educational, and social organizations and institutions have benefited from her enthusiasm, dedication, and organizational ability.

Libby has also contributed great amounts of her time and energy while serving in various capacities on the Board of the Charity Ball Association (of which she was President and Chairman of the Board), and as a trustee of Saint Mary’s Hall for twelve years (serving as President of the Board from 1961-63).  Her artistic talents, coupled with a marvelous executive ability, were an asset to the Women’s Pavilion at Hemisfair, of which she was Vice-President; to the Metropolitan Opera Auditions; and to the Garden Center.  Libby was a member of the Founding Committee to establish the present Garden Center, and she has also been its Treasurer and Garden Chairman.  She also served as Chairman of the Garden Pilgrimage and of the Christmas Pilgrimage.  She served as President of the Alamo Heights – Terrell Hills Garden Club for three years.  Her long list of accomplishments also includes having served as President of “Timely Topics,” President and Co-Founder of the Forum, and Mistress of the Robes for the Order of the Alamo.  One of Libby’s friends concluded her nomination letter by saying “I would like to add that all these above positions do not begin to indicate her accomplishments for these various groups.  Libby is a remarkable, intelligent, and charming person who has always taken the most difficult jobs and performed them brilliantly and with a smile.”