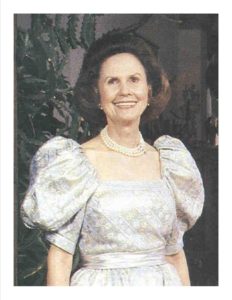 Volunteer-(noun)-one who enters into any service or undertakes anything of his own free will.

After spending an all too short morning with Patsy Steves, I almost expected to find her name when I looked in Webster’s dictionary for the definitions of “volunteer” and “extraordinary.”  But, like many whose list of accomplishments is long, Patsy doesn’t understand why she has been chosen as this year’s recipient of the Junior League’s award.  She professes that she has thoroughly enjoyed every project she has undertaken, yet insists that more often than not, she simply served to provide enthusiasm and ideas for others to follow.

Patricia Galt moved from Oklahoma to San Antonio with her family at the age of ten.  She attended Saint Mary’s Hall and graduated from Alamo Heights High School.  At the University of Texas in Austin, she received a degree in Philosophy and English Literature; two areas of study which she feels have served her well in her contemplation of and approach to life’s challenges.  She married Marshall T. Steves in 1948 and they have three sons: Marshall Jr., Edward, and Sam Bell.  In speaking of the values she has tried to install in her sons, Patsy said that duty to the city of San Antonio is one of the most important.

That sense of duty in Patsy has benefited San Antonio and much of Texas.  An attempt to list all the boards on which she has served and all the projects.  Which she has organized would prove much too lengthy, but there are some which she considers her greatest achievements.

Someone very close to Patsy said that Patsy has a unique ability to bring together people of talent to make exciting things happen.  By bringing together the Trinity Press, the Conservation Society, and notable local writers and artists, four unique books were published:  San Antonio, The Flavor of the Past 1845-1898 – A book by Dr Donald Everett based on newspaper clippings of the period; Viva Jesus Maris y Jose – A beautifully illustrated folk art book by Robert K. Winn; Lynn Ford, a Texas Artist and Craftsman by Mary Lance; and San Antonio Legacy, a chronicle of San Antonio legends by Dr. Donald Everett.

Patsy’s work with Texas wildflowers is apparent every spring.  As a founder, Vice President, and Executive Committee member of the National Wildflower Research Center, she has been instrumental in the planting of wildflowers along Texas highways, resulting not only in the in the beautiful scenery, but also in savings of water and petroleum sources (fertilizers) by planting “God’s way.”  She has become so well known in this endeavor that she has received calls from people reporting that a field was being mowed before the flowers had gone to seed and has stopped the destruction by informing the Highway Department.

In another related area, Patsy was one of the Founding Board of Directors and is a member of the Executive Committee of the San Antonio Botanical Gardens.  A source of joy to her and many others, the Gardens have grown and unfolded into one of the most exquisite places in San Antonio.  This huge conservatory will be divide into five parts to exemplify the different land and plant life of Texas and will feature palms, desert, succulents, orangery, and fern and alpine.

Easily considered to be the most important project of Patsy’s illustrative life, her “heart’s desire,” is her work with Fold Art.  She was the Founding President of the Folk Art museum at the San Antonio Museum of Art and has donated her extensive Fold Art Library, the Result of more than two decades of collecting.  She and Marshall began collecting early in their marriage when vacationing in Mexico and have an extensive collection which will eventually also be donated to the Museum but is currently housed exquisitely in their own museum-like Spanish hacienda that radiates her warmth and hospitality.

Her reputation for hospitality was justly earned during the preparation for 1968’s Hemisfair.  Assisting her husband who was President of Hemisfair, Pasty traveled to Europe with Marshall to entice other countries to participate in the World’s Fair and hosted in her home the numerous ambassadors from all over the world who visited San Antonio.

It is easy to wonder how and why Patsy found time to fit the Junior League into such a distinguished career that includes membership in other national boards, restoration of a number of historically significant buildings, and commitments to many other volunteer organizations.  But when asked what the Junior League has meant to her, Patsy is even more animated that before.  “The Junior League is really what introduced me to San Antonio.  It helped me learn about the real needs to be met there.  I learned more about the whole profile of San Antonio through my provisional year and through every project than I did in any other organization of which I have been a part.  And in those other organizations, I found the Junior League to be a source of pride because we knew that when we called in Junior League volunteers, we would have people upon whom we could depend.  It has served as a spring-board for me.”