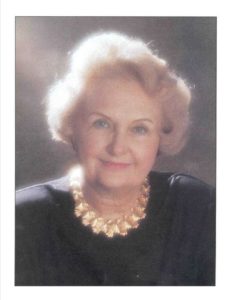 Phyllis Louis Vaughan has achieved the highest leadership positions in all of her volunteer associations.

However, what is more impressive is that she continues to actively participate in these organizations after the terms of these high offices have expired.  It is results and not the glory that matter most to Phyllis.

For the past 42 years, she has donated her time, talents and financial resources to making San Antonio a better place to live for those less fortunate.  This outstanding commitment has earned her the title of 1993 Junior League Volunteer Extraordinaire.

Her involvement with the Junior League of San Antonio began in 1953, shortly after she moved to San Antonio as the new bride of Curtis Vaughan, Jr.  A native of Maryland, Phyllis graduated with a business degree from Simmons College in Boston, where she met her husband, a San Antonio native working on his master’s degree at Harvard University.

“Coming from out of town and going through the provisional course was a good way to get to know San Antonio-an eye-opener to the city and what was needed,” she remembers.

Phyllis quickly rose up through the ranks of job responsibilities in the League from a member of the Finance Committee and interviewer on the Provisional Committee to the first Chair of the Metropolitan Auditions, where she established the format that is followed today.  She went on to become Second Vice-President in charge of The Bright Shawl Tearoom, Treasurer and finally President in 1965-66.

During her term as President, the property at 809 Augusta was purchased for additional parking and the Rummage Sale netted the highest profit-to-date at $19,447.34.

Phyllis has continued her interest in the JLSA, returning her many years of community experience to the organization that trained her.  She was Co-Chairman of the 60-55th Anniversary Celebration.  She has served as Sustaining Advisor to various committees, including her current role with the Financial Development Committee and Capital Campaign Committee.

Numerous local organizations have benefited from Phyllis’ leadership.  She served on the Board of the Family Service Association of San Antonio, Inc., for 12 years, including as President in 1971.  She continues to raise funds for the group.

As a 15-year member of the Charity Ball Association, Phyllis has served as Treasurer for two years prior to becoming President in 1985.  She has continued to serve on the Board as Chair, Parliamentarian, Co-Chair of Bylaws and a member of the Nominating Committee.

Sister-in-law, Libby Bishop herself a Volunteer Extraordinaire in 1984, believes Phyllis embodies all the attributes of a Volunteer Extraordinaire.  “She gives a project, a committee or an office all her best efforts, all her keen thinking, her dedicated time and her commitment to see a successful conclusion.  She is an inspiration for others to give their best.  She has been a leader in many organizations, but she has also been a loyal Indian, letting others take the credit.  She has quietly gone about her tasks in the community with a smile, laugh and good humor.”

Along with her volunteer work, Phyllis reared four sons:  Curtis, Robert, George and Richard, all of whom have made their homes in San Antonio.  All but the youngest son, who is a doctor, work for the family wholesale lumber company that bears their name.

Like mother like son:  Phyllis has served as an inspiration for them to participate in the community as well.  Curtis serves as the Family Service Association President, Bob has been on the Executive Committees of Big Brothers and Big Sister and KLRN.  George is Past President of the San Antonio Boys’ Club and serves as a trustee of Our Lady of the Lake University.  Her two daughters-in-law, Melissa and Claire, also followed in her footsteps as members of the JLSA.

Perhaps Melissa best sums up her mother-in-law:  “Phyllis brings a sense of energy and purpose to any task she accepts.  Her organizational skills and sense of dedication, determination and diplomacy insure that the task will be seen to successful completion.  Phyllis’ kindness and considerateness compliment her interpersonal skills and help explain her popularity in all areas of life.  As you can imagine, all of these talents and traits have contributed to her great success as a volunteer, but also make Phyllis a cherished friend and a loving and loved mother, mother-in-law and grandmother.

“My father-in-law always closes his blessings with remember the less fortunate.” Phyllis has acted on this principle by giving her time and energies so that others’ lives could be enriched in some way.”

On behalf of the Junior League of San Antonio, congratulations and thank you.  Phyllis!