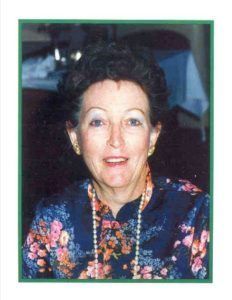 An unwavering passion for learning and a genuine love for teaching others what she has learned, along with an unquestionable desire to help those less fortunate in San Antonio are a few of the personal traits that highlight this Volunteer Extraordinaire, Sarah “Sally” Cheever.

A native of El Paso, Texas, Sally graduated from the University of California at Berkeley with a Bachelor Degree in Business.  In 1952, she married Charles E. Cheever, Jr. and upon his graduation from the University of Texas Law School in 1957 they moved to San Antonio where Sally began her tremendous involvement in the community.

Sally joined the Junior League of San Antonio in 1960, and as an active member worked at The Bright Shawl tearoom and on the Rummage Sale.  However, it is her involvement as a sustaining member of the League that her efforts and enjoyment are best realized.  Sally has been the League’s Sustainer Chair, and the Community Council Sustaining Advisor.

For several years, Sally was active with the League’s two fundraisers.  She has been the Sustaining Advisor for the Rummage Sale, coordinating sustainer involvement and a Sustainer Host for events held during Olé Marketplace.  She continues to donate items to the Rummage Sale and for several years, she and Charlie have graciously offered the use of their Port Aransas condominium to the Rummage Sale Live Auction, helping to directly raise funds for the League’s community projects.  Interestingly, her experience with Rummage Sale has led Sally to start an estate sale business with her partner, Sissy Gayney.

For 33 years, Sally has passionately applied herself to the San Antonio Chapter of the Girl Scots of America.  She has been a Girl Scout Troop leader for all four levels of scouting, Brownies, Juniors, Cadets and Seniors.  With her troops, she had traveled all over the country and led three trips to the Scout’s “Our Chalet” in Switzerland.  The leadership and fundraising skills she taught the scouts helped raise money for the trips.

According to Sally, she loves the scouting program, camping, and guiding the girls in the troops.  The girls learn to be self sufficient, which proves to be an invaluable tool for the rest of their lives.

In 1994, the San Antonio Area Girl Scout Council distinguished Sally with their most coveted award, the Trefoil Award, for her outstanding leadership and volunteer efforts.  Receiving the Trefoil was personally rewarding for Sally because of the satisfaction that Scouting brings to her.  In June 1997, Sally was honored as one of the Girl Scouts of Texas “Women of Distinction.”  Sally served on the San Antonio Girl Scout Council, visiting the Scout camp and working on the invitation committee for special events.

Because of her own family’s historical involvement with the Battle of Goliad in 1835, Sally counts her work with the Daughters of the Republic of Texas as one of the most interesting volunteer projects since she moved to San Antonio.  She has held the position of Chapter President and enjoyed her Sate Board post as Historian General which enabled her to visit all parts of Texas for district meetings.  Sally worked on the Alamo Library Committee for the Daughters of the Republic

Two other organizations with which Sally was involved coincide with her husband’s professional background and interests.  Since 1961, Sally was a member of the San Antonio Bar Auxiliary where she held many officer positions.  And for several years, Sally worked at the SAMM shelter on behalf of Broadway National Bank of which Charlie is the Chairman of the Board.

Over the years, Sally’s volunteer commitment to the SAMM shelter increased to include work on behalf of St. Peter’s Church as well a Broadway National Bank.  Sally’s church involvement also included service on the St. Monica’s Guild, an organization which raises money for college scholarships for University of the Incarnate Word, St. Mary’s University, and Our Lady of the Lake University.  Sally was a Board member and Property Chair for the group.

Lastly, Sally a member of the Military Civilians Club of San Antonio, an organization charged with fostering good relationship between the military and civilian communities.  Sally a Fourth Vice President in charge of planning a spring 1998 Club luncheon The Bright Shawl.  She is also a member of Delta Delta Delta Sorority and hosted a fundraiser for the group at her home last April.  On a personal note, Sally and Charlie have six children.  Suzanne Goudge, a JLSA Sustainer, and Cece Cheever, a JLSA Active, both reside in San Antonio.   Jean Cheever lives in New York City and is a Sustainer with the Junior League of New York City.  And Joan Cheever Quinn, Charles Cheever, III, and Christopher Cheever live in New York state.  The efforts put forth by Sally are evident in all the lives she has touched over the years in San Antonio.  Her unceasing energy and her high personal standards for helping others to be proud of their abilities are only a few of the traits this elegant woman holds.  It is with great honor the Junior League of San Antonio Sally Cheever as Volunteer Extraordinaire.