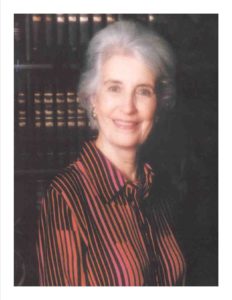 Exuberant best describes this year’s Junior League of San Antonio Volunteer Extraordinaire, Olive Davis.  Mrs. Davis becomes radiant when talking about her volunteer work and its broadening effect on her perspective of life.  She is passionate about working with people, and volunteering allows her to fulfill a personal commitment to helping people in the San Antonio community.

Mrs. Davis was born in Conroe, Texas.  In the fall of 1950, she came to San Antonio to visit family and friends and attend a style show luncheon at the The Bright Shawl.  During her visit, Olive was introduced by her friends to Bond Davis, whom she married in 1951.  The couple now has four children.  Their daughter, Carol West, lives in San Antonio with her husband and three children.  Their son, Reagan Davis is an attorney in San Antonio.  They also have twin daughters, Hallie Doyle, a school psychologist living in Denver, and Mary Davis, Director of Admissions for the San Antonio Academy. The couple’s black Labrador retriever, Odis, keeps Olive company while she is gardening or reading.

As an active, Mrs. Davis held the positions of Placement Chair, Recording Secretary and Treasurer, and served on the Regional Nominating Committee.  She worked on two JLSA community boards and volunteered for a local television series about famous authors.  Her busiest year was as JLSA president from 1961-1962.  It was the same year she and Bond were expecting twins and building a new home.  During her presidency, the League supported the San Antonio Symphony for Children’s Concerts and provided bus transportation for children in need.  The League also offered financial support to the Children’s Hospital, the Senior Center, the Nix Tumor Clinic, the Southwest Foundation, and the Harry Jersig Speech and Hearing Center.  The Metropolitan Opera Regional Auditions and the Arts Clearing House were maintained and funded as well.  While a sustainer, Olive served on The Bright Shawl Future Planning Committee which formulated a comprehensive management plan for the Junior League’s properties.

Mrs. Davis is an active member of the First Presbyterian Church.  For many years she taught Sunday school and served as a Bible leader.  Currently she is on the Session and serves as an Elder.  For the past 15 years Olive has been involved with the Building Committee and has been the committee’s chairman for three years.  Involved with many community organizations, she served on the board of Morningside Ministries and the Botanical Society board.  In 1975, Mrs. Davis was Mistress of the Robes for the Coronation of the Order of the Alamo – one of her favorite jobs.

It is with great honor that we recognized an inspiring woman and her efforts to help the San Antonio community.  Congratulations Olive!