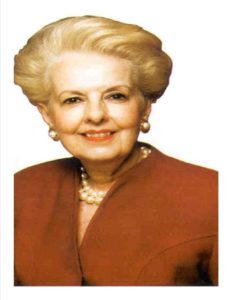 Her Dedication and Vision Transformed the Arts Community

Mrs. Stanley’s efforts in the arts have made San Antonio a better place to live.  Today, there are young people in arts careers as diverse as dance, music and the visual arts, all inspired by Margaret.

Margaret King Stanley’s work over the past 35 years has brought the arts to San Antonio and helped to sustain it.  Without her dedication and vision, San Antonio would not have enjoyed many of the world’s great artists.  As a guiding force for the arts, Margaret has influenced and mentored every arts organization in the city including the San Antonio Symphony, Carver Center, Danza Hispana and Dance Umbrella.

Margaret’s first volunteer job was as a 21-year old Junior League of San Antonio Provisional, working at the Witte Museum.  In 1952, she was the only member of her provisional class to work professionally.  She managed to complete volunteer work on the weekends while teaching school during the week.  Margaret’s career as a teacher lasted ten years and took her from the elementary grade level to Trinity University teaching classics and English literature to students only a few years younger than she.

Her second career was as a wholesale manufacturer.  She and Harriet Christian began ChrisStan Clothes, designed and manufactured in San Antonio.  The ChrisStan line was carried across the state in exclusive boutiques and written up in Woman’s Wear Daily.  Many ChriStan styles are now part of the Witte Museum’s permanent clothing collection.

While running ChrisStan, Margaret also served as Mistress of the Robes for the Order of the Alamo in 1969.  Margaret’s “Court of Time & Space” is still the only court to focus on the future.  The court made such a landmark, that in 1999 the Witte Museum mounted a major retrospective showcasing more than 15 gowns owned by the museum.  Margaret was the only mistress to have designed every facet of the presentation without the aid of outside consultants.  She researched and wrote the script, selected the music, designed the costumes and created the onstage entertainment.  She documented her experience by writing a 50-page manual to help future mistresses.

Margaret continued to serve as a volunteer. She sat on the Boards of the Arts Council of San Antonio (which she began under the auspices of the Junior League in 1950’s), the San Antonio Symphony (where she served a 3-year term as president of the Symphony League) and on numerous other boards.

Margaret began the symphony docent program, which sends volunteers into the schools to teach children about music.  She also initiated the Paint to Music Program, which coordinates music and visual arts.  Both programs continue today.  She also started the annual Symphony Belles presentation.  Since its founding 27 years ago, hundreds of young women have been presented as Symphony Belles.  This event is still one of the Symphony’s major fundraisers, raising more than $1 million dollars since its inception.

During her Junior League years, Margaret began the Arts Council of San Antonio, of which the City of San Antonio’s Arts & Cultural office is an outgrowth.  She also served as the Metropolitan Opera Auditions Chair and expanded the scope of JLSA Gallery to show the work of local and national artists, which generated a profit of over $10,000 for the JLSA.  Margaret also won recognition from the association of Junior Leagues for her outstanding design and editing of the Bright Scrawl magazine.

Through her interest in the Symphony and education, she developed the Student Music Fair, which showcased children’s music-related artwork and performances.  The Student Music Fair ran for three years at Trinity University and involved every school district in the city.

For 14 years, Margaret served as host for a weekly radio show on Trinity University’s KRTU-FM.  The show, “On Stage with Margaret King Stanley” focused on the arts as Margaret interviewed local, national and international music, dance and visual arts celebrities, in addition to people working in the arts.