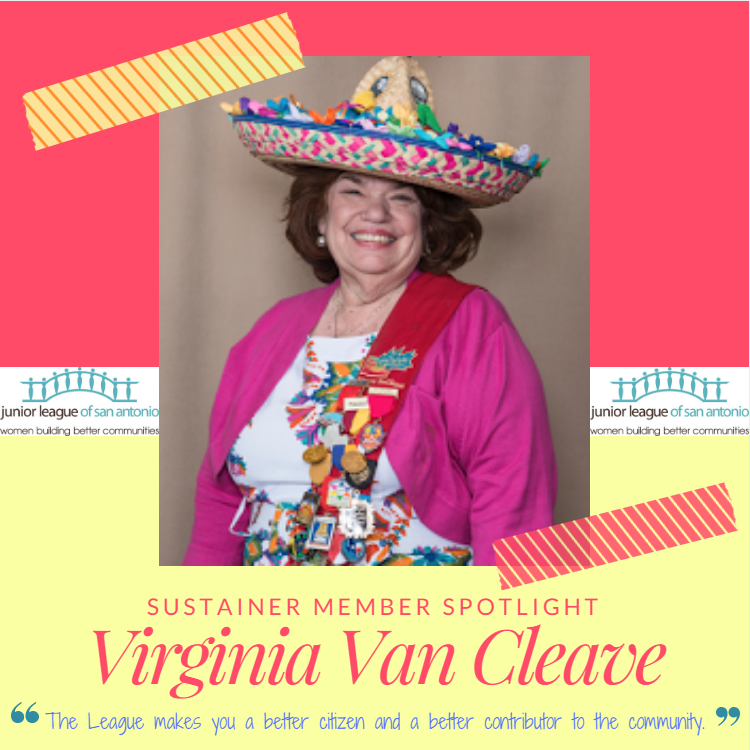 Sustainer Member Name: Virginia Van Cleave.
What year did you join the League?
Virginia joined the Junior League in the mid-1980s.
What was your favorite placement you held during your League career?
Her favorite placements were rocking babies at University Hospital and working the Rummage Sale.
What have you learned from the League that you have applied within your post-League endeavors?
Junior League Assertiveness Training and TEAM (Together Everyone Accomplishes More)
The groundwork and experience that starts in the League can be set in motion when working with other organizations. Virginia says, “The League makes you a better citizen and a better contributor to the community.”
How did becoming a member of the Junior League of San Antonio impact your life?
Virginia was inducted to the San Antonio Women’s Hall of Fame.
Other Volunteer efforts include:
– Member, in various capacities, of Fiesta San Antonio Commission since 1989
– Went to Thailand in 2013 to speak on how attendance could be increased at the historical monument in BangRachan, which is considered similar to the Alamo.
Affiliations:
– Various offices in the Alamo Mission Chapter
– Daughters of the Republic of Texas
– San Antonio Conservation Society
– Southwest School of Art
– State Association of Texas Pioneers
– President General, PMO Alamo Inc.
– Commissioner initiated the first Alamo Fiesta Medal
– Charter Member of the Assistance League where she opened the Thrift House which earned $47,000 this year alone. The money goes to support children in the community.