This month, we are featuring an interview with sustainer Melissa Unsell-Smith. Not only has Melissa been a part of the Junior League of San Antonio, Inc. (JLSA) since her provisional year in 2005, she is an entrepreneur as founder and president of Rectify. As leader of this tech company, she is an inspiration to anyone, especially women! Read on to learn more about Melissa and her leadership journey with JLSA. 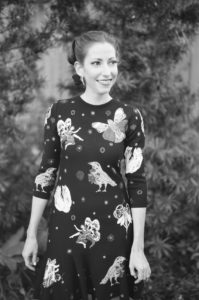 Q: Tell us more about yourself and your work!

A: I’m married and my husband and I have two dogs, a shih tzu and a border collie mix. I founded and own Rectify, a data privacy company. We take shared documents and run a automated process to take out sensitive information.

I also launched a passion project called Catalytic Icon as a resource for female entrepreneurs. It brings female founders together to connect and speed up the pace of their success. It’s hard to take that leap from your corporate job!

Q: That sounds amazing! I’m sure members will be interested. Why did you join JLSA?

A: I went to the University of Texas at San Antonio (UTSA) and was very involved on campus. I wanted to find ways to be involved after graduation and JLSA was a great way to connect with people, make friends, and give back to the community.

Q: I agree with that! What were your favorite placements?

A: I had a lot of different placements in my 12 active member years, but there are three leadership roles that really stand out to me. I had the privilege to be involved in legacy projects for the League with each of these three placements.

As Vice President of Communications Council, I got to really lean into my leadership abilities. It was the year we rebranded JLSA. The logo used to be purple and we created a new logo that was a bridge of women. We worked with an outside agency to rebrand. Almost a decade later, the League decided to adopt the Association of Junior Leagues International (AJLI) logo and branding standards as you see today.

After that, I was Vice President of Planning. I was involved in rewriting the Vision Statement, which required really excavating and looking inward at what the League was about. It was challenging, but also inspiring to have those discussions that led to true adoption of new ideas.

At the end of my League career, I was the Real Estate Task Force Manager. The Task Force was in change of making the decision to keep or sell JLSA’ historic building.

Q: Was that the Bright Shawl?

A: Yes. The Real Estate Task Force included JLSA members as well as many people outside of JLSA involved in the process, such as brokers and real estate developers. Some of the meetings were very poignant conversations. However, heated and challenging discussions like many of the ones we had are the ones that lead to success. It ended up being a five-year process. I went Sustainer during that time but stayed on the Task Force to see it through. It was a great way to finish my JLSA career because I used all of the leadership skills that I had developed from UTSA, my career, and Junior League.

I really like how the Junior League allows women to lead event if they don’t have the exact experience for the position. For example, I did not have real estate experience for my position as Real Estate Task Force lead.

Q: I can relate to that! I’m an engineer interviewing you and writing a JLSA blog post. What advice would you give to a newer member of JLSA like myself?

A: JLSA has so much depth as an organization. New members should just dive right in to access the League’s resources and get to know the League as a whole. What you put in is what you get. Invest time to go to events and meet people. I joined back in 2005 and I am still best friends with two people in my small cluster. I have friends from JLSA who are like family to me.

Q: What is your favorite part of being a Sustainer?

A: It’s been a pleasure to be on the other side of the fence and see the next leaders take the League where it is going.

The Junior League of San Antonio, Inc. is an organization of women committed to promoting voluntarism, developing the potential of women, and improving communities through the effective action and leadership of trained volunteers. Its purpose is exclusively educational and charitable. Learn more at jlsa.org.