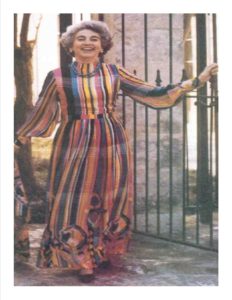 Maggie Saunders modestly says, “It is marvelous how things grow when you are working toward a community endeavor.”  Friends and associates give much of the credit to Maggie as the reason things in the arts have grown in San Antonio.  Due in large measure to her vision, intelligence, enthusiasm and dedication, the Southwest Craft Center has been restored to its present excellence and the Arts and Crafts School is flourishing.  Maggie’s efforts on behalf of the Craft Center, the McNay and the Symphony have a ripple effect because of her warm personal qualities which inspire the involvement of others.

Maggie’s own inspiration came from a proclamation made by Mayor Maury Maverick near the end of the depression.  He suggested a purpose for La Villita – to encourage and to enhance the role of the artist in the machine age.  “It seems hard to believe today, when there is a pot in every corner,” Maggie says, “but in the fifties and sixties there was no place where craftsmen, particularly weavers, could display their works.”  Determined to address this need and mindful of Maverick’s suggestion, Maggie and several outstanding ladies started the Southwest Craft Center in La Villita.  Betty Urschel writes of Maggie being the first President:  “It was a decision made in heaven for all of us.  Maggie’s gracious charm, her quiet tenacity of purpose, her talent for seeing into the future, of seeing and grasping opportunity, and for bringing the right people together at the right time has meant everything to the Ursuline Complex.”

As a founder of the Southwest Craft Center, she has devoted herself to it with real passion, serving as President for several terms, as Chairman of the board and Vice-President.  She has consistently and conscientiously been its guiding force through the years, from the first gallery in La Villita to the present four and one-half acre, beautifully restored complex.  She laughingly remembers the beginnings of the Copper Kitchen.  “I never thought we would get involved in the food business.”

Her participation in other areas of the arts has paralleled the astonishing rate at which the arts have grown in San Antonio.  The McNay Museum has expanded its plant, membership and programming, as have the Art Institute and the San Antonio Symphony.  Maggie has been President of the Women’s Symphony Committee and on the Symphony Board.  She served as trustee of the McNay Art Institute and has been on the Friends of the McNay Board.  In addition to raising three children, Maggie has served as President of the Pi Phi Alumnae and as President of the Arts Council Board.  She had been a contributing member of the Charity Ball Road, the Art League Board, the Family Services Board and the UTSA Arts Advisory Committee.  She was Co-Chair of the Association of Museums Trustee Conference held in San Antonio last year and has been involved in the San Antonio Music Festival.  Her organizational abilities and time spent on projects that enrich the city are outstanding.  Her efforts have been tireless on behalf of downtown redevelopment, historic preservation and quality educational opportunities.

Our very special honoree marvels at the educational opportunities offered by today’s Junior League, “I wish I could have gone to a marketing seminar,” she says, praising the organization which teaches its members so much about he community and voluntarism.  Oh, that we could all market our projects with the same expertise, enthusiasm and vitality that Maggie Saunders has marketed hers.