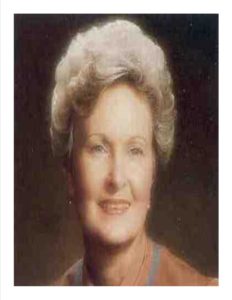 1995-96 A talented leader, a dedicated mother, a team member, a true blue volunteer, a visionary, an inspiration.  There are not enough good words to describe Nancy Edwards Zachry.  Although she is very modest about the magnitude of the impact she has made on the San Antonio community, the beneficiaries of her volunteer service know the real story!

Nancy is a native San Antonionan who attended Alamo Heights High School.  After graduating from the University of Texas at Austin, Nancy taught seventh and eighth graders from 1958 to 1961 at Randolph Air Force Base School.  Although she did volunteer work as early as high school, her first full-time volunteer work began in 1962 when she participated in the Bluebird Auxiliary at Methodist Hospital, a large organization of volunteers who render service to the patients and their families.

Nancy joined the Junior League in 1967.  Among her many placements during her membership, she served as Membership Chair, Rummage Sale Treasurer and Volunteer Chair.  However, Nancy’s favorite placement was the Rummage Sale.  “I loved collecting and organizing the rummage,” says Nancy.  “It was a heart-warming experience to see how beneficial this event is to the customers as well as the San Antonio community.”

Many of the organizations to which Nancy has graciously given her time were introduced to her through the Junior League.  With the tools the Junior League gave her, she continued her life’s commitment to community service.  She has focused more of her attention recently on the San Antonio Botanical Society.  During the twelve years she has been involved with the organization, she has served as chair to several committees, as Vice President of Development and she is currently serving her second tenure on the executive committee.  In addition, she has actively participated on the Master Planning Committee to develop a long-term plan for the gardens.  According to Nancy, “There are so many programs to be developed for public enjoyment which can benefit citizens of all ages at the Botanical Gardens.”

San Antonio’s annual Fiesta Celebration has been an important event in Nancy’s life for many years.  She was honored to be a Duchess to the Court of Courts for the Order of the Alamo in her youth.  She has been involved in the Battle of the Flowers Association for sixteen years and office, chairman of various events, and she is currently serving in her second year as President to the organization.  The mission of the organization is “To keep alive the patriotic and historical traditions of Teas and San Antonio.”  Nancy also represents the Battle of Flowers Association on the Executive Board of the Fiesta San Antonio Commission, Inc.

Nancy has been an active member of St. Mark’s Episcopal Church since 1959.  She had served on the Altar Guild of the church since 1960.