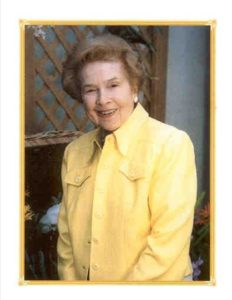 Spending a Lifetime Making a Difference

Mrs. Deely is a role model of someone who has lived our league’s motto because she has spent her lifetime making a difference in the lives of others.  She is frequently described as an energetic, amazing, generous and wonderfully talented volunteer.  She has a “zest for life” and the energy to make things happen.  At 92 years of age, she continues to demonstrate the spirit of a “Volunteer Extraordinaire.”

During her Junior League years, Mrs. Deely started the Free Children’s Clinic and worked there for ten years.  She also helped start the Tumor Clinic at Robert B. Green Hospital.  As an active league member, Mrs. Deely held several leadership positions.  While she was Admissions Chair, voting procedures were changed from secret committee ballot to open ballot.  Mrs. Deely also served as Provisional Chair, The Bright Shawl Chair and Admissions Chair, prior to becoming President in 1944.  Since the war was going on, her year as President was especially challenging.

Over the years, Mrs. Deely’s talents have been tapped by many organizations.  In fact, she has served a as a Past President for the Women’s Symphony Board, the Green Hands Garden Club, the Military Civilian Club and the Timely Topics Club.  She also founded the Patriotic Education Committee to provide patriotic textbooks in schools.

Along with four friends, Mrs. Deely established the “100 Club” an organization, which benefits the children of police officers and firefighters who are killed in the line of duty.  Over the years, this organization has helped raise thousands and thousands of dollars for these children in our community.

Without Mrs. Deely’s dedication and vision, it is highly unlikely our city would enjoy the benefits of the talented volunteers of the San Antonio Botanical Society.  She was a founding member of the Botanical Society and also served as Past President.  She still currently sits as a Board Member of the San Antonio Botanical Society and is actively involved on the Sullivan Carriage House Committee.  Through her active involvement with the gardens Mrs. Deely has built many wonderful and lasting friendships with individuals around the globe. Her friends are quick to point out she has an amazing knowledge of plans and an even more amazing ability to excite others about the endless possibilities.

One of the highlights of the luncheon was when Dave Stockdale, Director of the Botanical Gardens, announced that the staff had developed a beautiful, vibrant pink rose and named it in her honor.  When she heard the news, she was so excited that her enthusiasm could be felt by everyone.  Mrs. Deely was gracious in accepting the honors bestowed upon her, saying she just followed her heart and never quit trying to find a way to get the work done.  True to form, Mrs. Deely was quick to encourage everyone to be involved and to continue looking for ways to improve our community.  Because of her commitment and energetic involvement, Margaret Deely was a natural choice to receive the honor of JLSA’s “Volunteer Extraordinaire.”