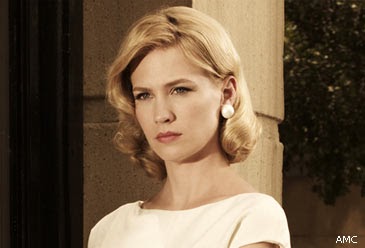 But how typical is Betty of real Junior League members (all 160,000 of them)?

While many Junior League members take time off from work to raise families, 71% of members work full or part time outside of the home.  Many members do some combination of both:  work, stay at home, and go back to work again.  And all, like Betty, are actively involved in civic leadership in their own communities.

Here are just a few of The Junior League’s change agents.

•Rep. Carolyn Maloney (D-NY), member of the Junior League of New York and the proud sponsor of a House bill to establish a National Women’s History Museum on the Mall in Washington.
•Jan Langbein, The Senior Policy Advisor at the Office on Violence Against Women at the U.S. Department of Justice and a 27 year member of the Junior League of Dallas.
•Betty Simms, U.S. Senate, Missouri, has made significant contributions to improving the health, economic, and social well-being of women and children.
•Rose Hudson, President and CEO of the Louisiana Lottery Corporation.
•Kay Hagan, U.S. Senate, North Carolina, “one of the smartest, hardest working, most effective senators in North Carolina” according to Governor Mike Easley, credits her experience with The Junior League.
•Gena Lovett, COO Alexandra Investment Management, a New York hedge fund.
•Glenda E. Hood, former Florida Secretary of State and Mayor of Orlando.
•Pat Evans, former three-term Mayor of Plano and was Plano’s “Citizen of the Year” in 2004.
•Dee Dickinson, one of the world’s foremost experts on learning and human development.
•The Honorable Sandra Day O’Connor, the first female Justice on the US Supreme Court.

Which Junior League women have positively impacted your community?

Today, The Association of Junior Leagues International Inc. (AJLI) is comprised of more than 160,000 women in 292 Junior Leagues throughout Canada, Mexico, the United Kingdom and the United States.  Together, they constitute one of the largest, most effective volunteer organizations in the world.